All Collections
How to use global demand data
Studios
How do I find under-monetized markets or shows?

How do I find under-monetized markets or shows?

Glad you asked! That's what demand measurement system has been built for. By combining Demand measures and revenue for titles in a certain market, a ranking of shows by the efficacy of their monetization can be created.

Shows in a single market

By comparing the monetization of each show with the Demand Expressions for it in the country, a Demand Monetization Index was formed: oversold shows earned more than their demand warranted while undersold shows had far more demand than monetization.

To enable this analysis, it is recommended to use the following variables as inputs:

In doing so, we create a standardized, cross-platform measure of revenue. Parrot Analytics refers to this measure as price per minute per duration (PMD). 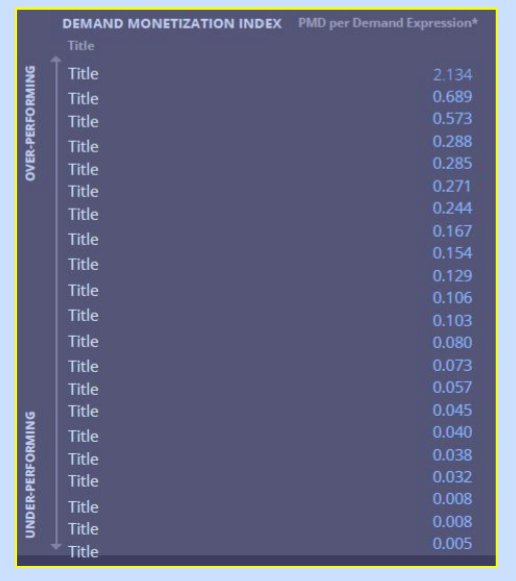 Such an analysis is a powerful tool in determining monetization strategies that are tailored to specific markets.

A show across multiple markets

By comparing the monetization of a show to its demand in multiple markets using Demand Expressions per capita, a ranking of these markets can be obtained. A high value means that the title was sold for more than its demand in that market warranted, while a low value means that the high demand for the title in that market was not converted to monetization as effectively.