All Collections
About global demand data
FAQ
How can content and SVOD platforms generate demand in markets where they are not yet available?

How can content and SVOD platforms generate demand in markets where they are not yet available?

The short answer is that audiences express demand for TV series irrespective of commercially negotiated rights.

News about new content travels quickly, and often audiences the world over are eagerly anticipating the launch of a new series or movie in their country. Our Global TV Demand Report highlights just how important social media is, for example, in the discovery of new TV shows: Within seconds a consumer in the UK can be notified of a new TV show to watch by their friends in the US - even if it is a "stealth release."

Because our global demand measurement system incorporates multiple country-specific content demand signals, we are able to gauge popularity for content long before a series, or platform, is officially released in its home market, or any other market.

Let us examine a specific example, which is current as of March 2018. Hulu is currently not available in the United Kingdom, yet it managed to attract 9% of the total digital originals UK demand share in 2017: 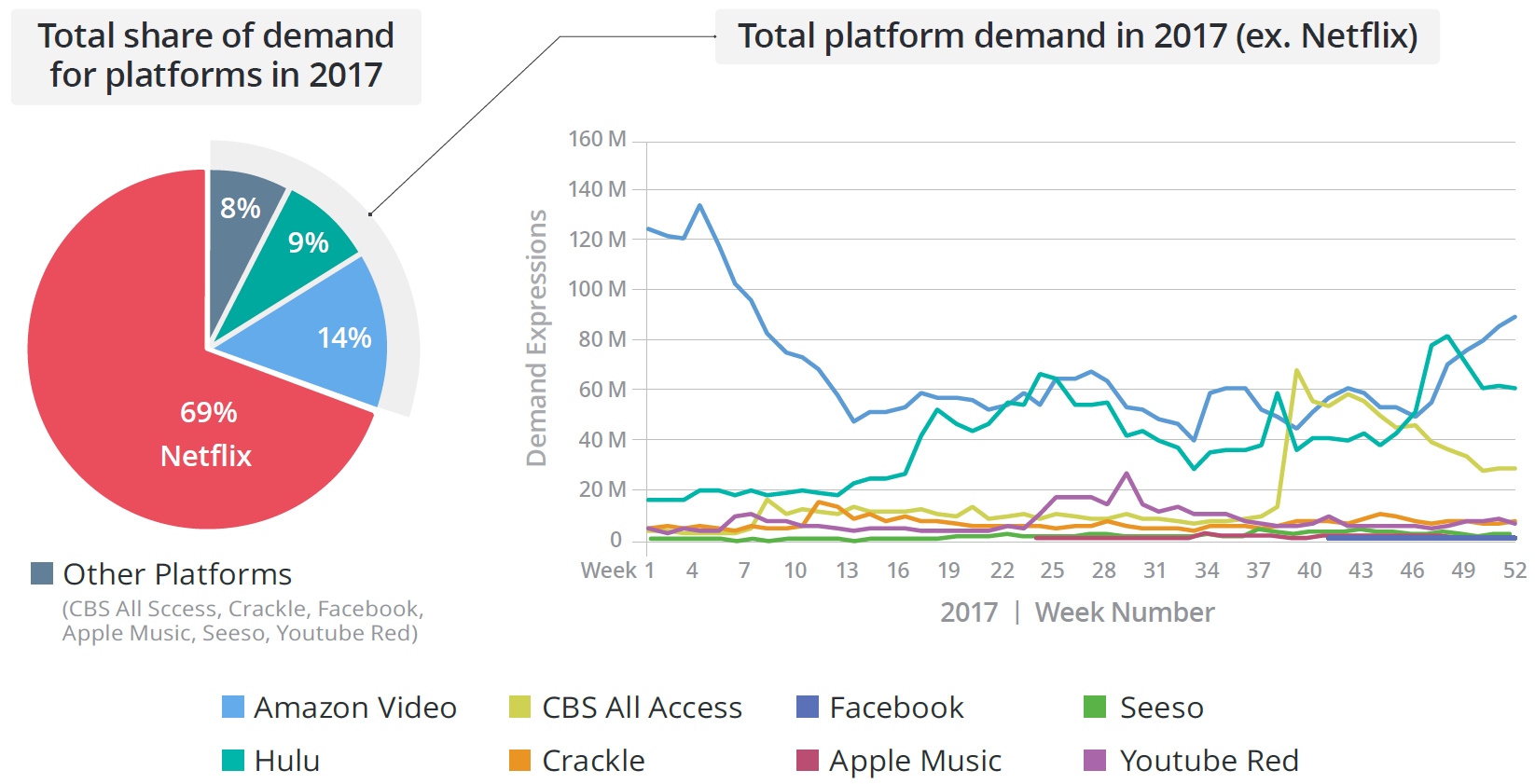 How is this possible?

The answer is that Parrot Analytics quantifies the level of demand in any country for content long before the rights have been agreed for a territory; we then attribute this local market demand to the original network/platform in that market (even if the platform has not yet launched in that market).

Parrot Analytics measures demand across all platforms and devices, irrespective of whichever party holds the commercial license for distribution in a given market. As explained above, we use the original network on which a show first aired, to aggregate local demand per platform.

Let's take a look at another country for The Handmaid's Tale. In Germany, for example, we can see that this show was popular long before Telekom (EntertainTV-Serie) acquired the rights. This means people in Germany had already started watching/consuming the show (likely illegally), they were talking about the show, reading about the show, and sharing information about the show. That’s the definition of the "audience demand" that Parrot Analytics measures: The weighted average of all of these activities, for all shows, in every country.

Here is one final example: Star Trek: Discovery. This title was first released on CBS' All Access platform, which is the original network. Netflix as of March 2018 held the international rights in markets outside of US. In all markets, therefore, we attribute the local country demand for this show against the local demand for "CBS All Access", as this was the original network where the show first aired.

To summarize: Irrespective of which party holds a current domestic license for a brand, we always aggregate our data against the platform on which the title was first released; brand licensing deals do not impact on our measurement of the popularity of digital originals.