What are Originals Demand Shares?

Originals Demand Shares is an analysis that groups the demand for series in a market or markets together, based on the original platform that each series first aired/streamed on. The goal is to show which sources of original series are attaining the most attention from audiences, across all series.

The example below demonstrates Originals Demand Share for the United States in August 2021. 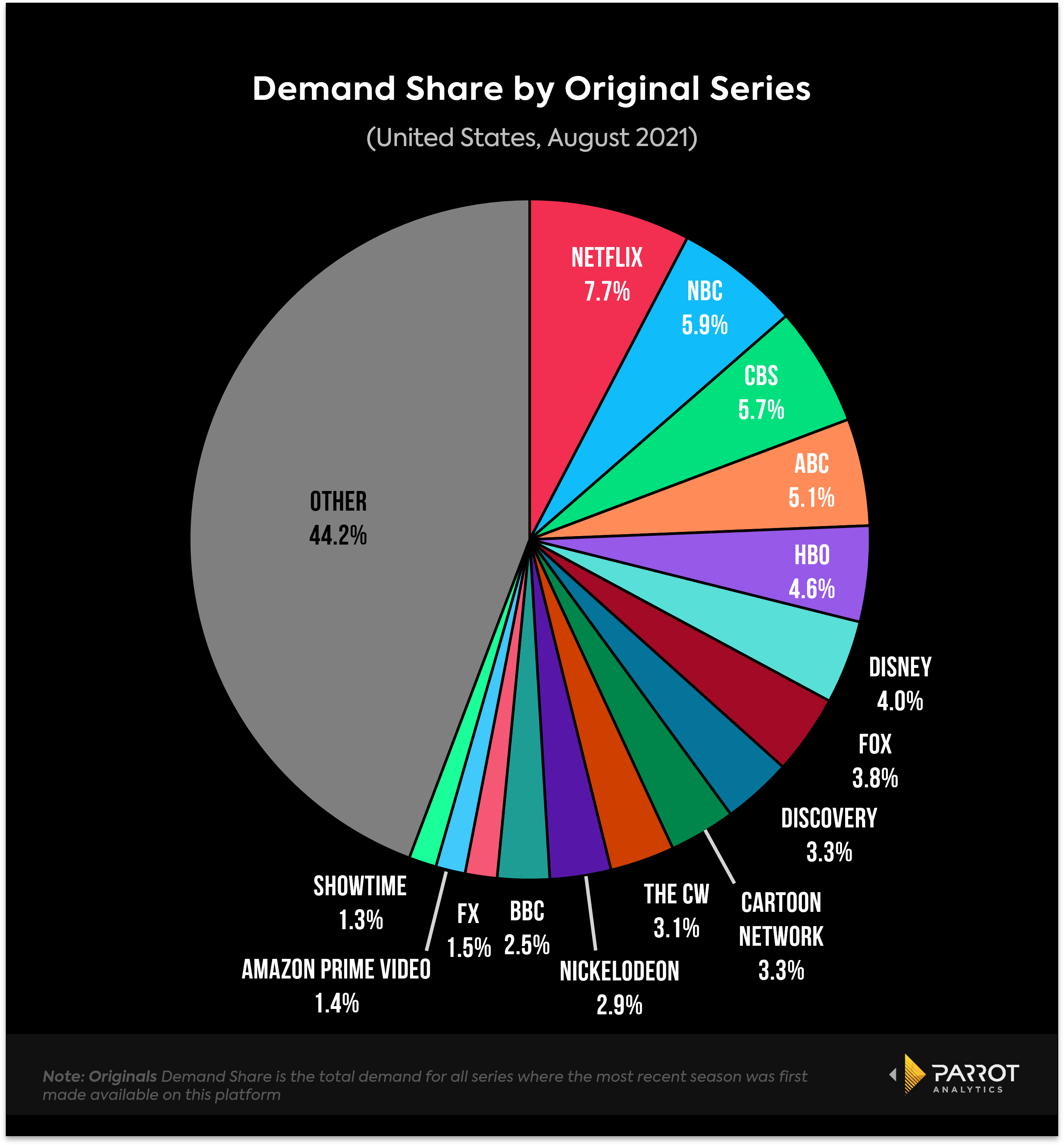 For all series, we allocate ‘original platforms’ based on which platform the most recent season was first made globally available on. A ‘platform’ refers to any method of serving content and can be a broadcast network, cable channel, satellite channel, streaming service or even a website.

As this allocation is based on the first platform the most recent season debuted on globally, we regard the series’ ‘original platform’ to be the same in all markets. In the case of simultaneous global releases, such as Game Of Thrones Season 8 which became available on multiple platforms across the world at the same time, we take this to be the show’s ‘home’ platform, which in this case would be the HBO cable channel in the United States.

One difference from the digital original method is the integration of platforms into a single entity. For example, in Originals Demand Shares analyses the NBC broadcast network and the Peacock streaming service are combined into a single entity that creates ‘NBC Originals’. NBC is a mass-market network and Peacock is a mass-market streamer and so we believe that combining their original series better shows the true state of the market. In contrast, NBC’s sister network USA Network targets the premium drama audience segment and so is not suitable to combine into the ‘NBC Originals’ entity (For analysis that does combine these networks, please refer to Corporate Demand Shares).

Another example of this integration of platforms is FX and FXX. While they are two separate networks, they are closely related enough that we believe it makes the most sense to treat them within the Originals Demand Shares analysis as a single, combined entity that creates ‘FX Originals’.

Note that while we perform this integration for Originals Demand Shares analyses, for other analyses Parrot Analytics produces (such as Digital Original Demand Shares) it makes more sense to keep NBC broadcast network original series and Peacock original series separate and so platforms are not integrated.

Certain series are co-produced by one or more platforms. 2011’s The Bridge is an example of this type of series as it was created jointly by Sveriges Television and Danmarks Radio. All participating platforms get equal credit for a co-produced series and are considered the original platforms in all markets.

As this analysis is based on the most recent platform that any given series aired on, licensed content available on a platform will count towards that series’ original platform. As an example, let us say that HGTV has licensed and broadcast a British series that was first shown the previous year on the UK’s Channel 4. Even if an analysis is based on United States audience demand, that series will still be counted as a Channel 4 Original.

If, however, Channel 4 were to cancel this series and HGTV were to acquire the rights and subsequently produce and air a Season 2, then the new season will be considered a HGTV Original.